The Hibachi – history and uses

The hibachi (火鉢 “fire bowl”) is a traditional Japanese heating device. It consists of a round, cylindrical or a box-shaped open-topped container, made from or lined with a heatproof material and designed to hold burning charcoal. 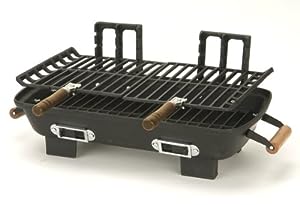 In North America, the term “hibachi” refers to a small cooking stove heated by charcoal (actually called shichirin in Japanese), or to an iron hot plate (teppan) used in teppanyaki restaurants.

History
It is not known when the hibachi was first used in Japan. However, written records suggest that it was in use by the Heian period (798-1185 AD). Owing to the low availability of metal in Japan, early hibachis were made from dug-out cypress wood lined with clay. However, craftsmen soon began to make more decorative versions with lacquered finishes, gold leaf, and other artistic embellishments. Stronger materials such as metal and ceramics became popular over time. Traditional hibachis can be very attractive objects in themselves and are today sometimes sold as antiques. They were originally used mainly by the samurai classes and aristocrats but gradually spread among the general population. Their design developed throughout the Edo period.

For most of its history the hibachi was used for heating, but it has been put to many uses; for example, as a cigarette lighter and portable stove for Japanese troops during World War II.

The hibachi was once a common sight in Japan before the Second World War, and was often seen in waiting rooms at train stations, but it became a rarity and was gradually replaced by the oil heaters now commonplace in Japan. (Central heating is relatively rare in Japanese homes.) Hibachis remain in use in some traditional settings, such as tea ceremony, older stores, and outdoor festivals in winter, such as setsubun.

Use
As with other braziers, charcoal often sits on a layer of ash. To handle the charcoal, most often a pair of metal chopsticks are used, similar to Western fire irons and tongs, called hibashi (火箸?, fire chopsticks).

The traditional Japanese hibachi is a heating device and not usually used for cooking. In English, however, “hibachi” often refers to small cooking grills typically made of aluminium or cast iron, with the latter generally being of higher quality. Owing to their small size, hibachi grills are popular as a form of portable barbecue. They resemble traditional, Japanese, charcoal-heated cooking utensils called shichirin. It has been suggested[by whom?] that these grills were confusingly marketed as “hibachi” when they were introduced to North America because that word was easier than “shichirin” for English speakers to pronounce. click here to listen to the pronunciation of “shichirin”

Teppenyaki chef cooking on a hibachi

Alternatively, “hibachi-style” is often used in the United States as a term for Japanese teppanyaki cooking, in which gas-heated hotplates are integrated into tables around which many people (often multiple parties) can sit and eat at once. The chef performs the cooking in front of the diners, typically with theatrical flair—such as lighting a volcano-shaped stack of raw onion hoops on fire.

Thanks to Wikipedia for the information.